THE SWEAT OF THE PASSION

He was born at Louth, Lincolnshire, and his conversion so much offended his father, an earnest Protestant, that he laid his curse upon him ; but God turned the curse to a blessing, and Eustace White became a priest and entered on the English Mission, October 1588. He was apprehended at Blandford, and having confessed himself a priest, a certain minister, one Dr. Houel, a tall man, reputed of great learning, was sent for to dispute with him, but was ignominiously vanquished, as he failed to disprove a certain text which White affirmed to be in the Bible 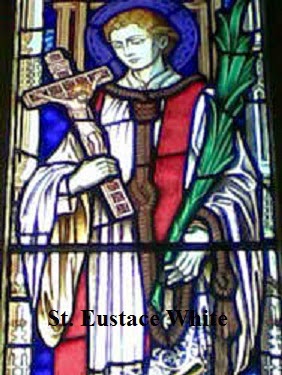 . At the Bridewell, London, he was once hung by Topcliffe in iron manacles for eight hours together ; but though the torment caused the sweat from his body to wet the ground beneath, nothing could be extracted from him of the least prejudice to Catholics. Under the extremity of his passion he cried out, “ Lord, more pain if Thou pleasest, and more patience.” To his torturer he said, “ I am not angry at you for all this, but shall pray to God for your welfare and salvatiön.” Topcliffe replied in a passion that he wapted not the prayers of heretics, and would have him hung at the next session. Then said the martyr, “ I will pray for you at the gallows, for you have great need of prayers.” He suffered at Tyburn, December 10, 1591.

“And His sweat became as drops of blood running down to the ground.”—Luke xxii. 44.