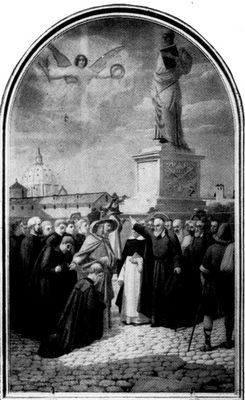 Salvete Flores Martyrum- All Hail Ye Infant Martyr Flowers. St Philip Neri greets in the street the students of the English College in Rome with this phrase.

"In honour of the Undivided Trinity, for the exaltation of the Catholic Faith and the increase of the Christian religion, by the authority of Our Lord Jesus Christ, of the Holy Apostles Peter and Paul, and our own, after mature deliberation and imploring the divine assistance, by the advice of our Venerable Brethen the Cardinals of the Holy Roman Church, the Patriarchs, Archbishops and Bishops present in the city, We decree and define as Saints, and inscribe in the Catalogue of the Saints, Blessed John Fisher and Thomas More, and that their memory shall be celebrated in the Universal Church on the anniversaries of their heavenly birth." 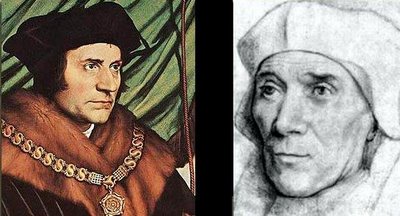 The Trial and Execution of Sir Thomas More

Foras much as, my Lords, this Indictment is grounded upon an Act of Parliament, directly repugnant ,to the Laws of God and his Holy Church, the Supreme Government of which, or of any part thereof, no Temporal Person may by any Law presume to take upon him, being what right belongs to the See of Rome, which by special Prerogative was granted by the Mouth of our Savior Christ himself to St. Peter, and the Bishops of Rome his Successors only, whilst he lived, and was personally present here on Earth: it is therefore, amongst Catholic Christians, insufficient in Law, to charge any Christian to obey it. And in order to the proof of his Assertion, he declared among other things, that whereas this Kingdom alone being but one Member, and a small part of the Church, was not to make a particular Law disagreeing with the general Law of Christ's universal Catholic Church, no more than the City of London, being but one Member in respect to the whole Kingdom, might enact a Law against an Act of Parliament, to be binding to the whole Realm: so he shewed farther, That Law was ,even contrary to the Laws and Statutes of the Kingdom yet unrepealed, as might evidently be seen by Magna Charta, wherein are these Words; Ecclesia Anglicana libera sit, & habet omnia jura integra, & libertates suas illcesas: And it is contrary also to that sacred Oath which the King's Majesty himself, and every other Christian Prince, always take with great Solemnity, at their Coronations. So great was Sir Thomas's Zeal, that he further alleged, that it was worse in the Kingdom of England to rest1se Obedience to the See of Rome, than for any Child to do to his natural Parent: for, as St. Paul said to the Corinthians, I have regenerated you, my Children, in Christ; so might that worthy Pope of Rome, St. Gregory the Great, say of us Englishmen, Ye are my Children, because I have given you everlasting Salvation: for by St. Augustine and his followers, his immediate Messengers, England first received the Christian faith, which is a far higher and better Inheritance than any carnal Sather can leave to his Children; for a. Son is only by generation, we are by Regeneration made the spiritual Children of Christ and the Pope." 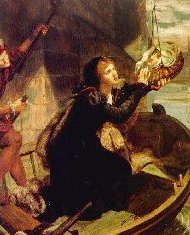 Feast of the Forty Martyrs in the modern calendar 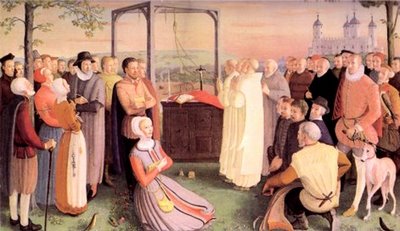 Approval of the feastday


In England, these martyrs are commemorated in the traditional calendar within the Catholic Church by a feast day on 25 October, which is also the feast of Saints Crispin and Crispinian, but after the Second Vatican Council they are also now celebrated together with all the 284 canonized or beatified martyrs of the English Reformation on 4 May. In Wales, the Catholic Church keeps 25 October as the feast of the 'Six Welsh Martyrs and their companions'. The Welsh Martyrs are the priests Philip Evans and John Lloyd, John Jones, David Lewis, John Roberts, and the teacher Richard Gwyn, Wales continues to keep 4 May as a separate feast for the beatified martyrs of England and Wales.

Traditionally in England, May 4 has been kept as the Feast of the Crown of Thorns, Festum susceptionis coronae Domini

comes to pray at the tomb of Blessed Dominic Barberi where he was then buried at Aston Hall. Dominic himself predicted that there would be priests forever in residence at Aston. He cannot have expected the present use.

Aston Hall is situated in Aston, a village two miles south of Stone and about six miles north of Stafford.
The Hall contains bed-sitting rooms for eight priests who dine in community or in their own rooms if indisposed. There is an automatic lift to the bed-sitting rooms.
The Hall was purchased from Major Wenger in 1961 by Cyril Hartley, K.S.G., who gave it to the Birmingham Archdiocese as a guest house for retired and convalescent priests. Also, priests are welcome who wish to spend a little time and quietness in pleasant country surroundings. The Hall has a large garden, spacious grounds, and a field, altogether about six acres.
The Hall is served by a community of Sisters of Charity of St. Paul, whose head convent is at Selly Park, Birmingham. The Sisters are trained to serve the old and sick.

There is a very charming chapel in the Hall, near the main entrance, which is part of the Passionist Church erected by Blessed Dominic Barberi C.P.

The Hall is partly surrounded by a wide and deep moat (now dry). This gives some indication of the life of Aston Hall.

One of the glories of Aston is that with a few exceptions in recent times, it was always the home of good Catholic families. Old families like the Stanleys, Heveneninghams, Simeons and Welds were possessors. Early in the 19th Century there was a community of Franciscans, followed by Brigittine Nuns.

Father Benjamin Hulme was in charge of the Aston parish and lived in the Hall 1838-1842. Shortly after his arrival he was cleaning the Chapel when under the altar he found the lost relics of St. Chad. These relics are now the glory of St. Chads Cathedral, Birmingham.
In 1842 Father Dominic Barberi C.P. came to the Hall, and lived there until his death in 1849. The Passionist Fathers stayed on for some years and finally went to Sutton, near Preston, taking with them the body of Blessed Dominic.

After the departure of the Passionists the Aston parish was served by seculars. Father Huddleston (later Canon) was appointed Parish priest. He pulled down the old Hall and built the present one, finishing it in 1855. Canon Huddleston died in 1871. In 1909 the Hall was sold to non-Catholics and remained in non-Catholic hands until Major Wenger bought it.
Now it is a delightful home for retired and convalescent priests.

Many people have in recent years visited the Hall. Pilgrims come to see the hallowed spot where Blessed Dominic lived. Parish parties, desiring to see again their old Parish priest, come and are always welcome.

Priests and sick living in the Hall appreciate the good care and kindnesses of the Sisters in charge and find a great joy in living in a place hallowed by our grand old Catholic forefathers who kept the faith for us.