THE SLEEP OF THE JUST

A NATIVE of Rodesby, Derbyshire, as a fellow of Exeter College, Oxford, he was accounted as an acute philosopher and an excellent Greek and Hebrew scholar. But grace called him to yet higher distinction. He became a Catholic, entered the English College, Rome, (also here for more history) and returned a priest to England in August 1580. After some months' zealous work he was apprehended while preaching in Mr. Roscarrock's house, and imprisoned, first in the Marshalsea and then in the Tower. He was there nearly a year, and in divers conferences with ministers won the admiration of his audience. After his first racking he was set out in great snow, and Mr. Roscarrock was kept in a dark corner hard by to hear his pitiful groans. 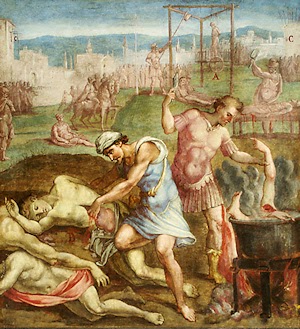 After his second racking he lay five days and nights without food and in silence. All this time he slept, as he thought, before our Saviour on the Cross, and on coming round found himself free from pain. Tortures unavailing, the Bishops of Canterbury and London offered him the second Bishopric in England if he would but go to St. Paul's Church. After B. Campion was executed, the hangman took hold of Sherwin with his hand all bloody to terrify him, but the martyr reverently kissed the martyr's blood, and then shed his own, December 1, 1581.

The Roscarrock Chapel in the Cornish Church of St Edellion's Church in Cornwall contains the sixteenth-century tombstone of John Roscarrock, whose son Nicholas, composed the hymn of St Endelienta, normally used on the Saint's feast day, 29th April. Nicholas Roscarrock was a student of Exeter College where his Catholic sympathies were aroused and sustained. He was a friend of the Blessed Cuthbert Mayne, martyred in Launceston on 30th November 1575. A pure gold rosary, believed to have belonged to Nicholas Roscarrock may be seen in the Victoria and Albert Museum one of the beads of which depicts St Endelienta.