THE first act of B. Thomas with his companions and followers on entering Durham was to seize the Cathedral and purge it of every heretical token. The Communion table was broken up, the Protestant Bible and Book of Common Prayer were burnt. The Catholic revival spread far and wide with marvelous speed. 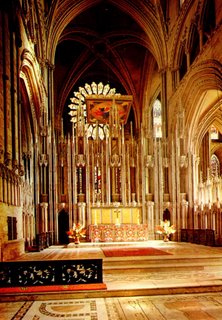 Altars were erected, holy water-stoups replaced, and everything prepared for the Holy Sacrifice. On Sunday, St. Andrew's Day 1569, the first High Mass was sung, the whole official choir assisting in the thronged Cathedral, and the reconciliation of Durham to the Church was crowned on December 4, then the second Sunday in Advent, by the priest F. Holmes bearing special faculties from Rome. Mounting the pulpit after preaching on the state of heresy and schism in the religion established by law, he exhorted his hearers to submit once more to the Holy See and to kneel down in proof thereof. He then publicly absolved the prostrate crowd, from their censure, and reconciled them to the Catholic Church. Holy Mass was then offered in reparation and thanksgiving.

"In the same day wherein the heathen had defiled it was it dedicated anew with canticles and harps and lutes and cymbals. And all the people fell upon their faces and adored and blessed up to Heaven Him that had prospered them." 1 MACH. iv. 54, 55.

We even know the identity of the organist at these Masses, one John Brimley.

His gravestone in the Galilee Chapel says:

John Brimleis body here doth li
Who praysed God with hand and voice
By musickes heavenlie harmonie
Dull myndes he maid in God rejoice
His soul into the heavens is lyft
To prayse him stil that gave the Gyft
Obiit Ao.Dni.1576 Octo.13.