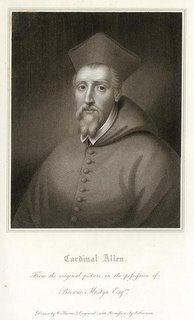 IN his defence of the Seminary Priests he wrote thus: " First and foremost for the clergy, it is wholly distrained and destroyed, as the world knoweth. The Chief Prelates, Bishops, and others, all spoiled of their dignities and livelihoods, thrust into prisons, forced into banishment, till by manifold and long miseries they be almost all wasted and worn away. These, then, so many, so notable, and so worthy, for whom God, nature, and their place of birth do challenge a part of that so much prized prosperity, feel none of it; but for mere conscience and confession of the truth, which their holy predecessors laid and left with them jn deposition, have lost their terrene lot, and either are dead or have passed so many years in misery, as those other good fellows, their intruders, have lived in joy and felicity ; who, indeed, are ' filii hominum qui nubunt et nubuntur,' (contrast Matthew xii, 25) that is, certain fleshly companions, unordered apostates, and contemptible ministers, who entering into the right and room of others, provided not for them, do think all fair weather in England, and have good cause to like the luck of these late years, which maketh true men mourners, while these thieves be merry."

"They have changed my delightful portion into a desolate wilderness. They have laid it waste, and it hath mourned for me."—
JER. xii. 10, 11.